Very loosely based on the novel: ‘World War Z’ by Max Brooks, this film adaptation directed by Marc Forster attempts to tell an enormous globe trotting story of a spreading zombie virus, and although it does have a few entertaining elements here and there, I personally found the film to be extremely messy, and overall, pretty forgettable.

The story revolves around former United Nations employee: ‘Gerry Lane’, as he traverses the world in a race against time to stop a zombie pandemic that is toppling armies and governments, and soon threatening to destroy humanity itself.

Even with a pretty standard plot for a zombie flick, the film unfortunately is still brimming with plenty of cliché moments and jump-scares throughout, in addition of course to the film’s overall lack of style. Making the entire experience really struggle to stand on it’s own amongst the many other films within it’s genre, which I do feel can be mostly put down to the director, Marc Forster.

Brad Pitt, Mireille Enos both do a decent job as: ‘Gerry’ and ‘Karin Lane’ within the film, despite their characters having pretty much no characterisation outside of them being a loving family. Their children however, portrayed by Sterling Jerins and Abigail Hargrove. I found very irritating, as aside from their constant screaming and crying, their child performances weren’t very convincing to me at all. Strangely, Peter Capaldi also has a small role within the film, despite barley adding anything to the story.

Ben Seresin handles the cinematography throughout the film, and aside from a few scenes were hand-held camera is used to reflect the chaos we see during many of the zombie attacks, many of the visuals are extremely flat. As the cinematography is very bland and uninspired, usually sticking to very standard shots and never really experimenting with anything incredibly interesting. The CGI effects throughout the film’s run-time are also very inconsistent, as in some scenes the visual effects work perfectly fine. In others however, they look truly awful, with many of the zombies bouncing around as if they were made out of rubber. I do appreciate the various aerial shots which are used during many of these scenes however, as I felt they captured the enormous scale of the pandemic very well.

The film’s original score by Marco Beltrami is decent overall, it works within the film to increase what tension and drama there is on-screen. But outside of the film, it isn’t memorable in the slightest. Coming off as your standard blockbuster soundtrack with the occasional ‘Inception’ noise thrown-in for good measure, it is very possible the score was rushed however. As for those who may not know, ‘World War Z’ actually went though a very troubled production process, as multiple different directors, writers and producers were brought-on and then dropped-off constantly. This is mostly why the film sometimes feels very unconnected and messy (which also isn’t helped by it’s quick pacing). Taking this into account, the film definitely could’ve been far worse, but I still found it very noticeable.

With all that in mind however, the film still does have some other elements I enjoy. As it is simply fun to watch the madness ensue at various points during the film, as the hordes of zombies bring chaos to the streets of whatever city the film finds itself in. My favourite scene within the film is definitely near it’s ending, as the film takes a very different direction in choosing to focus on a small tension-filled scene, which I thought was pretty well executed for the most part.

In conclusion, ‘World War Z’ isn’t the worst big budget film you could spend your time watching, it definitely has a variety of problems. From the predictable and generic plot, to the boring characters and the mix of poor visual effects and writing. Which all insured that I wasn’t such a huge fan, but if you enjoy a mindless zombie blockbuster every so often, then there may be some enjoyment in this for you. But for me personally, it’s nothing more than a 3/10. 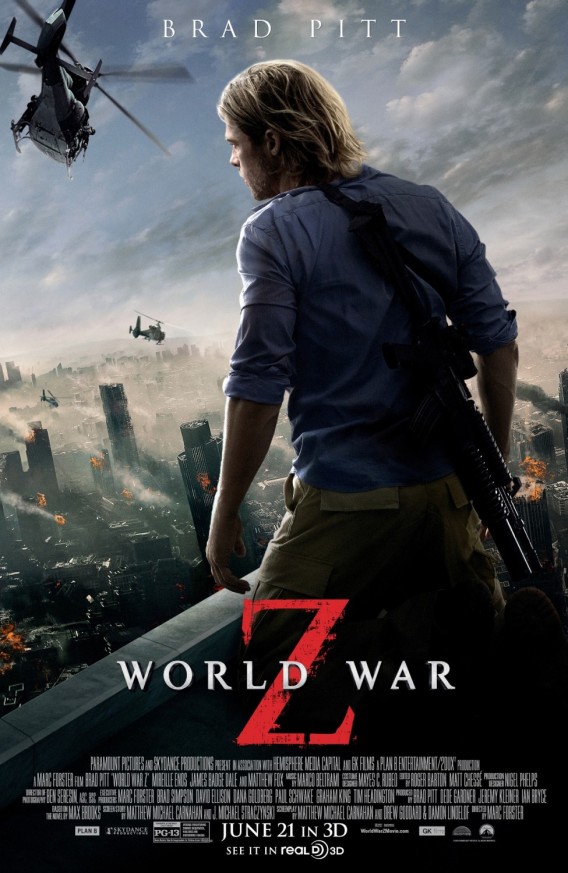 ‘The Girl with All the Gifts’ is based on the novel of the same name by M. R. Carey, another zombie story, this time attempting to focus more on young children and how they would cope with an infection wiping out all of humanity. As well as leaning more towards the ‘fungus’ side of infections when it comes to some of the film’s visuals and ideas, and while I appreciate the attempt to turn this narrative into a film. I don’t think it was incredibly successful in the long-run.

In a dystopian future where humanity has been ravaged by a mysterious fungal disease, humanity’s only hope is a small group of hybrid children who crave human flesh while still retaining the ability to think and feel. But when their base is later attacked, a teacher, a scientist and a group of soldiers must embark on a journey of survival with a special young girl named: ‘Melanie’.

Directed by Colm McCarthy, the idea of a group of characters going on a dangerous journey is a pretty standard outline for an apocalyptic story, sadly however, ‘The Girl with All the Gifts’ doesn’t manage to improve much on this structure. As many of the decisions throughout the film were pretty strange to say the least, as the film flips back and forward between horror and drama rapidly within some scenes (sometimes even implementing comedy as well). As a result of this, the film’s tone is very inconsistent, and can really take the viewer out of the story at points. Even the name given to the zombie-like creatures within the film: ‘The Hungries’, I personally found a little too-ridiculous.

Sennia Nanua portrays the main character of the film: ‘Melanie’, a young girl with the abilities of: ‘The Hungries’ that still retains her human mind, and while I think her character is definitely interesting, I don’t feel her performance is up-to-par here. As she was only thirteen during filming, many of the emotional scenes with her feel very unbelievable. Alongside this, there are a variety of scenes with her character acting like a wild animal as her hunger continues to grow, most of which I found unintentionally hilarious. Perhaps if she was a little older when filming began this could’ve been avoided, although the weak writing also doesn’t help. The supporting cast do redeem this somewhat however, as Gemma Arterton, Paddy Considine and Glenn Close are all fairly excellent within their roles.

The cinematography by Simon Dennis is easily my favourite element of the film, as there are many stunning shots throughout the run-time. As every shot really lends itself to many of the film’s more impactful or beautiful scenes, with the brilliant make-up effects and great set design also adding toward this, which is especially surprisingly considering the film’s budget, which was actually a lot smaller than many other zombie flicks. This does unfortunately affect the CGI effects throughout the film however, as a variety of shots throughout the story have some very out-of-place looking CGI visuals.

The wonderful original score by Cristobal Tapia de Veer is another element of the film I also really enjoyed, as the soundtrack is very atmospheric and really adds to many of the tense scenes throughout the film, very similar to this composer’s other scores such as: ‘Utopia’ and ‘Dirk Gently’s Holistic Detective Agency’, with the tracks: ‘Gifted’ and ‘Pandora’ being my personal favourites purely for how unique they are.

In conclusion, ‘The Girl with All the Gifts’ isn’t the worst zombie film I’ve ever seen. As the story does have some interesting elements and the cinematography and original score are pretty on point throughout the film, but sadly, the poor writing and laughable main performance combined really drag the film down for me. So I’m gonna give this one a 5/10 overall, although I was initially tempted to go lower, I believe this a fair grade based on the filmmaking. 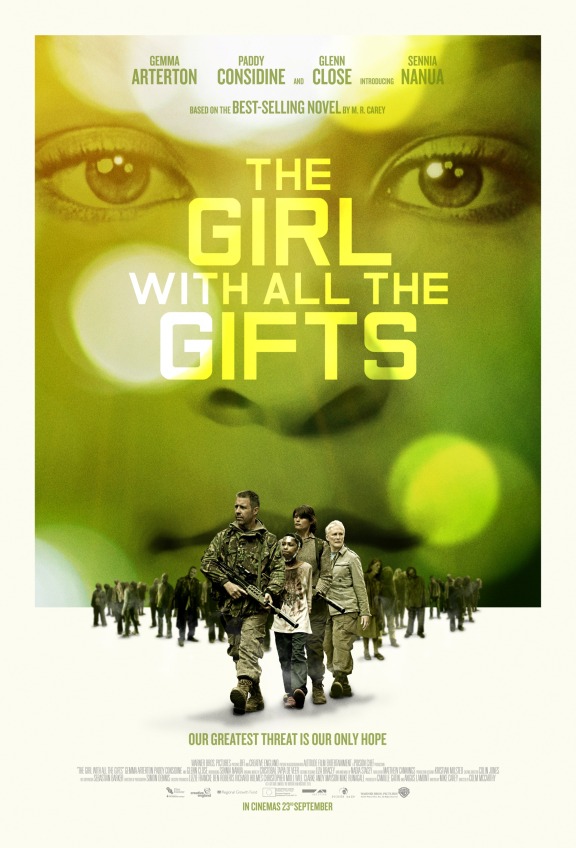